Knowing how much ammo you should carry with you depends on a variety of factors. How long will you be playing? Are you playing in an arena or woods ball? And last but not least, what type of airsoft gun are you using. Assuming you already know some of these crucial factors, lets get into the details.

Anyone who has played both arena and woodsball understands how different these two are. It requires different tactics, weapons, apparel and rules. Surprisingly this also applies to ho much and what type of ammo you should bring.

Some arenas require you to buy and use the ammo that is provided. This is usually how places make their money and provide a level of control on what type of BB a player can use. Other arenas let players bring their own ammo but they must be of a certain quality and heaviness.

Assuming you can bring your own ammo to an arena, typically you will use around 300 BBs per match. So it will depend on how many matches you intend to play along with a few other factors. Simply put, when I play in an arena I only bring 1,000 rounds of ammo or so because typically I just support the arena and purchase their ammo.

These numbers are really high but I want to have enough for not only myself, but others on my team. Furthermore, when my friends and I play woodball, we are usually there the entire day and really there’s no telling what situation we might find ourselves in.

The ultimate factor on how much airsoft ammo you will use during a match is your role in the game. A support gunner will use way more BBs than a stealthy sniper. Take a look at some of these numbers to determine my best estimate on BB count usage by role:

As a rifleman you can expect to use between 200 and 800 rounds per match. This, of course, well depends on your play style and how heavy of a trigger finger you have. My average is usually around 300 a match with a total for the day around 1500.

When you’re a support gunner you can expect to use the most amount of ammo out of all the classes. Something between 1000-2000 per match, depending on how much supporting fire your team needs. I don’t play as a support, but some of my friends tend to use about 10,000BBs a day!

My favorite class and one that I play as a lot is the mobile sniper. In a single match I use about 20-50BBs a game, (depending on how terrible of a shot I am that day) For the day I bring about 1000 sniper rounds but typically only use about 250.

How Much Ammo Do I Need Final Thoughts

If you follow this guideline, you should be able to avoid running out of ammo or not bringing enough with entirely. I always bring way more airsoft ammo than I’ll need because I always go with the philosophy of “Id rather bring too much than not enough”. I also always have that one friend that doesn’t bring enough ammo.

Hopefully now you can have a better idea of how much ammo you should bring for an airsoft match. Please make sure to checkout our other airsoft beginners tips here! 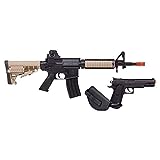 How Much Airsoft Ammo Do I Need For A Skirmish?

I don't know about you, but when I first starting playing airsoft I never knew how much airsoft ammo I should bring with me in the field. Even after years
Send this to a friend